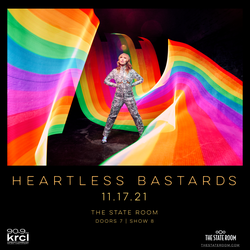 Heartless Bastards are back with new music for the first time in more than 5 years, and they are out on tour and making a stop at The State Room on November 17.

Heartless Bastards’ sixth studio album and first new music in more than half a decade, A Beautiful Life is heralded by today’s premiere of the soulful new single, "How Low," available now at all DSPs and streaming services; an official music video premieres today via YouTube.

"It’s becoming harder and harder to choose a simple life; so many people struggle to get ahead so they don’t get left behind,” says Heartless Bastards frontwoman Erika Wennerstrom. "I believe that a truly elevated, conscious society is one that seeks to lift each other up—one where we work for the common good."

Taking the name "Heartless Bastards" from an incorrect answer on a multiple-choice trivia game (the question: what is the name of Tom Petty's backing band), Erika Wennerstrom founded the band in 2003 in Cincinnati. It started as a recording project and evolved into a live band with a revolving cast of musicians, and they began playing regularly throughout the Midwest. When Patrick Carney of the Black Keys saw the band, he liked what he heard and passed along a copy of their demo to his label at the time, Fat Possum Records. Heartless Bastards signed with Fat Possum, releasing their first 3 albums, Stairs and Elevators (2005), All this Time (2006), and The Mountain (2009). The band moved to Partisan Records for Aarow (2012) and Restless Ones (2015). Wennerstrom released her debut solo album Sweet Unknown in 2018.