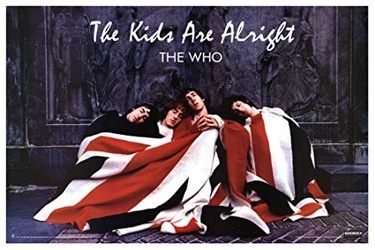 Postponed KRCL's Music Meets Movies - The Who: The Kids Are Alright

Join KRCL for Music Meets Movies on Thursday, April 9, for a screening of the 1979 documentary, The Who: The Kids Are Alright. 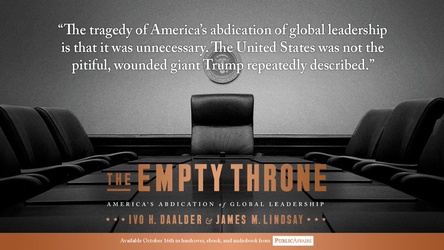 Join James Lindsay in exploring how America emerged from the catastrophe of World War II convinced that global engagement and leadership were essential to prevent another global conflict and further economic devastation. That choice was not inevitable, but its success proved monumental. It brought decades of great power peace, underpinned the rise in global prosperity, and defined what it meant to be an American in the eyes of the rest of the world for generations.

James M. Lindsay is senior vice president, director of studies, and Maurice R. Greenberg chair at the Council on Foreign Relations (CFR), where he oversees the work of the more than six dozen fellows in the David Rockefeller Studies Program. He is a leading authority on the American foreign policymaking process and the domestic politics of American foreign policy. Before returning to CFR in 2009, Dr. Lindsay was the inaugural director of the Robert S. Strauss Center for International Security and Law at the University of Texas at Austin, where he held the Tom Slick chair for international affairs at the Lyndon B. Johnson School of Public Affairs. From 2003 to 2006, he was vice president, director of studies, and Maurice R. Greenberg chair at CFR. He previously served as deputy director and senior fellow in the foreign policy studies program at the Brookings Institution. From 1987 until 1999, he was a professor of political science at the University of Iowa. From 1996 to 1997, Dr. Lindsay served as director for global issues and multilateral affairs on the staff of the National Security Council. He has also served as a consultant to the United States Commission on National Security/21st Century (Hart-Rudman Commission) and as a staff expert for the United States Institute of Peace's congressionally mandated Task Force on the United Nations. Dr. Lindsay has written widely on various aspects of American foreign policy and international relations. His most recent book, co-authored with Ivo H. Daalder, is The Empty Throne: America’s Abdication of Global Leadership. His previous book with Ambassador Daalder, America Unbound: The Bush Revolution in Foreign Policy, was awarded the 2003 Lionel Gelber Prize, named a finalist for the Arthur S. Ross Book Award, and selected as a top book of 2003 by the Economist. Dr. Lindsay’s other books include Agenda for the Nation (with Henry J. Aaron and Pietro S. Nivola), which was named an "Outstanding Academic Book of 2004" by Choice Magazine, and Congress and the Politics of U.S. Foreign Policy. He has also contributed articles to many major newspapers and magazines, including Foreign Affairs, the New York Times, the Washington Post, and the Los Angeles Times. He writes the blog The Water's Edge, which discusses the politics of American foreign policy and the domestic underpinnings of American global power. He hosts the weekly podcast, The President’s Inbox, and co-hosts the weekly podcast, The World Next Week.

The John Price & Marcia Price World Affairs Lecture Series is in partnership with Westminster College, is designed to inform attendees about key foreign policy issues, to create a dialogue about timely topics, and to foster a globally savvy community. Our guest lecturers are leading authorities in their fields, coming from a wide range of disciplines and backgrounds, and are nationally recognized authors, academics, and foreign affairs, experts. The impact of our lectures is the long-lasting understanding of the context of world affairs in our interconnected global society.

The World Affairs Lecture Series is free and open to the public. However, registration is required.  While all ages are welcome to attend, due to the content of the lecture, we recommend ages 12+.

Free parking is available on Westminster College campus after 5:00 p.m. A parking permit is not required. This lecture is held in building #4. For optimal parking, we suggest parking lot C, as 1300 E is currently closed for construction.) Will refreshments be available before the lecture? UCCD invites the public to attend a small meet and greet reception with the guest lecturer at 6:00 pm; The lecture begins at 7:00 pm. We serve tiny savory and sweet bites, as well as water and other libations. However, we are not able to accommodate dietary restrictions. Food and beverages are not allowed in the lecture halls. How can I contact the organizer with any questions? For all other additional questions, please contact Pari Kemmick at pari@utahdiplomacy.org | 801.832.3276 | utahdiplomacy.org

We hope to see you there! 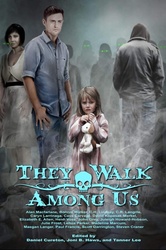 We're excited to welcome the Utah Chapter of Horror Writers Association back to The Printed Garden to launch their new collection of horror fiction by Utah writers! If you were here for the release of their previous collection, The Peaks of Madness last year, you know that something good (and creepy) is coming! Join us for an evening of chilling fiction as a few of the contributors to the new collection They Walk Among Us, read their terrifying selections, and sign copies of the anthology. Daniel Curaton, the editor of They Walk Among Us, will also be reading from his new book, Monster Brain. Enter a world where anxiety rules and compulsion is the tool. Like fighting a dragon with a tooth pick, Obsessive-Compulsive Disorder takes many forms and has many techniques to torture and abuse its victims. It feeds on fear, dread, and suffering. To relieve the pain, sufferers develop habits, called compulsions, deflecting OCD's obsessive gaze for a while, before it breaks through and returns with a vengeance. This book is a work of art, on public exhibition. You will find 50 original poems and writings dealing with OCD, it's affects, and rediscovering that there is life after diagnosis. Travel alongside one man's journey as he falls into the dark recesses of his mind, finds inner strength, and is reborn in this narrative of the inner worlds. Allow yourself to experience the beauty and terror of Monster Brain. This event will begin at 7:00 p.m.

The annual Spring Conference presented by League of Utah Writers is a full day of workshops and presentations focused on improving your skills as a writer. Planned tracks include fiction, nonfiction, poetry, screenwriting and presenter training. Come join us! $20 for members, $50 for non-members with an optional membership 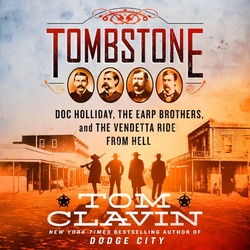 The true story of the Earp brothers, Doc Holliday, and the famous Battle at the OK Corral, by the New York Times bestselling author of Dodge City and Wild Bill. On the afternoon of October 26, 1881, nine men clashed in what would be known as the most famous shootout in American frontier history. Thirty bullets were exchanged in thirty seconds, killing three men and wounding three others. The fight sprang forth from a tense, hot summer. Cattle rustlers had been terrorizing the back country of Mexico and selling the livestock they stole to corrupt ranchers. The Mexican government built forts along the border to try to thwart American outlaws, while Arizona citizens became increasingly agitated. Rustlers, who became known as the cow-boys, began to kill each other as well as innocent citizens. That October, tensions boiled over with Ike and Billy Clanton, Tom and Frank McLaury, and Billy Claiborne confronting the Tombstone marshal, Virgil Earp, and the suddenly deputized Wyatt and Morgan Earp and shotgun-toting Doc Holliday. Bestselling author Tom Clavin peers behind decades of legend surrounding the story of Tombstone to reveal the true story of the drama and violence that made it famous. Tombstone also digs deep into the vendetta ride that followed the tragic gunfight, when Wyatt and Warren Earp and Holliday went vigilante to track down the likes of Johnny Ringo, Curly Bill Brocius, and other cowboys who had cowardly gunned down his brothers. That "vendetta ride" would make the myth of Wyatt Earp complete and punctuate the struggle for power in the American frontier's last boom town. We're proud to partner with Utah Humanities and the Marmalade Branch of the Salt Lake City Library to welcome author/historian Tom Clavin back to Salt Lake City to read from, discuss, and sign copies of his newest book, Tombstone: The Earp Brothers, Doc Holliday, and the Vendetta Ride From Hell. Light refreshments will be served. This event will begin at 7:00 p.m. 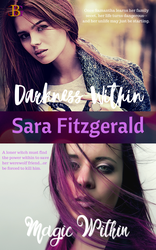 Join us in welcoming author Sara Fitzgerald to The Printed Garden to read from her new collection of two stories: Darkness Within and, for the first time in print, Magic Within! Darkness Within: After Samantha learns her family's vampire secret, she's in danger - and her unlife may just be starting. Will she fight her calling to save herself and those she loves or will she embrace the darkness forever? Magic Within: Nancy, a witch, has never fit in. When her best friend, Josh, is attacked by a werewolf, to save him Nancy needs to search within and find her own magic or be forced to destroy Josh.

Sara will be reading from, answering questions about, and signing copies of her new book at The Printed Garden on Thursday, April 23rd. Some light refreshments will be served. This event will begin at 7:00 p.m. 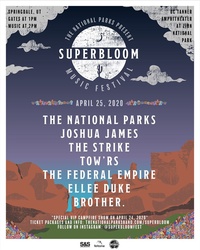 Postponed with The National Parks

The "Best Little Plant Sale in Utah" is being reimagined to keep our community healthy. We will hold an online sale with staged pick-up times in early May, with an anticipated April 30 launch of online sales. Until then, we are thrilled to share the expected list of #vegetable varieties available at the Sale with you. Please stay tuned for additional details, and happy perusing! Click here for plant sale order list.
Wasatch Community Gardens
Plant Sale is their largest fundraiser of the year and enables us to continue to empower people to grow and eat healthy, organic, local food - a mission that is relevant now more than ever. More than 30,000 plant starts will be available for the community; we hope you'll join us in this work!

The HLAA Walk4Hearing is coming to Salt Lake City! These events are nationwide and create awareness about hearing loss prevention, screening, treatment & maintain good hearing health. The walk will be held Saturday, May 16th at Sugar House Park in Salt Lake City in the Big Field Pavilion. Registration will begin at 9 AM with the walk starting at 10 AM. Aside from the walk, there will be entertainment, activities for children, food trucks, live music, and resources for those with hearing loss. Learn more: http://hlaa.convio.net/site/TR?fr_id=2634&pg=entry