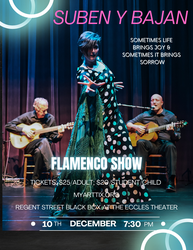 Winter Battle of the Bands FINALS!

The National Tongan American Society Presents the: THE 25TH ANNUAL INTERFAITH: Po Hiva Kilisimasi, This is a free event and open to the public, We are celebrating Christmas with music. Tongan choirs from all Interfaith group will be presenting this night to celebrate the spirit of christmas.

Fruition’s newest album, Broken at the Break of Day, shines a light on all five members of the band, whether it’s on the traded lead vocals of “Dawn” or the irresistible rhythms of “Where Can I Turn.” As it’s been for more than a decade, their sound is hard to define, but the songwriting and the harmonies tie their diverse influences together. For example, “Counting the Days” is a poignant love letter, while “For You” shows the exasperation of maintaining a relationship on the road. The band’s most electrifying rock moment, “Do What You Want,” is then followed by “Nothing More Than Spinning,” which sounds like a folk song interpreted by Queen. T

The prolific band will release Wild as the Night and Broken at the Break of Day together on vinyl as well, giving listeners the option to hear the music as a collective body of work in a playlist-focused era. https://thestateroompresents.com/state-room-presents/fruition-2