A Look Back at 1979: Music, the World and the Launch of KRCL 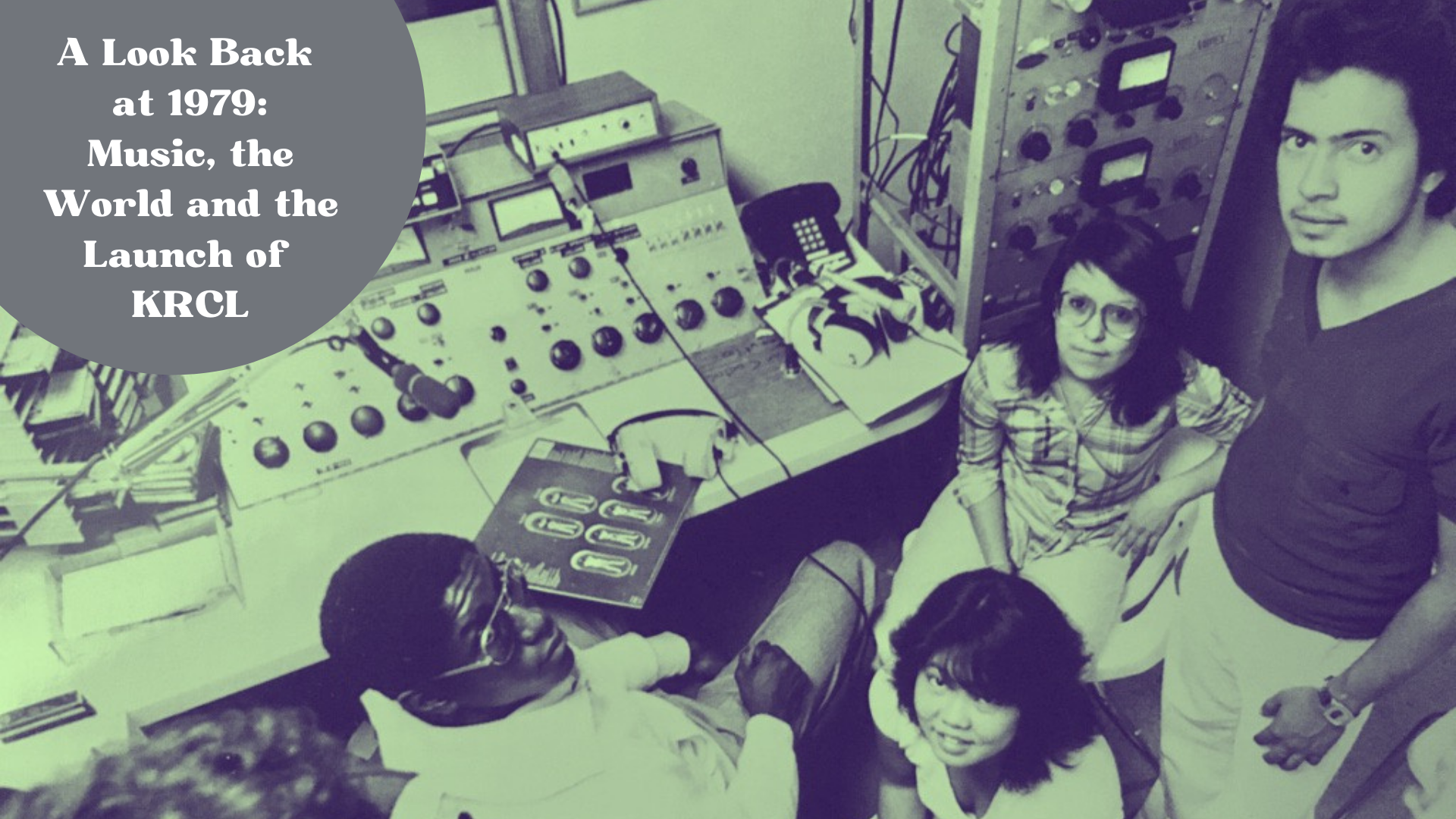 The time was right for a nonprofit community radio station to start in Salt Lake City on December 3, 1979. See what was happening in Music and World Events leading up to the launch of KRCL.

January 6 – ABC's American Bandstand featured the debut of the "Y.M.C.A. dance" using the hand gestures forming the letters YMCA during a broadcast with the Village People.

January 9 – The Music for UNICEF Concert is held at the United Nations General Assembly to raise money for UNICEF and promote the Year of the Child. It is broadcast the following day in the United States and around the world. Hosted by the Bee Gees, other performers include Donna Summer, ABBA, Rod Stewart and Earth, Wind & Fire. A soundtrack album is later released.

February 2 – Sex Pistols bassist Sid Vicious is found dead from an overdose, a day after being released on bail from Rikers Island prison.

February 7 - The Clash kicked off their first concert of their first American tour at the Berkeley Community Theatre outside San Francisco. Bo Diddley opened the show.

February 13 - The Guardian Angels are formed in New York City as an unarmed organization of young crime fighters.

February 26 – B.B. King becomes the first blues artist to tour the Soviet Union, kicking off a one-month tour there.

March 26 - In a ceremony at the White House, President Anwar Sadat of Egypt and Prime Minister Menachem Begin of Israel sign an Egypt–Israel Peace Treaty.

April 2 – Kate Bush begins her first, and for 35 years, only tour. She becomes the first artist to use a wireless microphone, enabling her to sing and dance at the same time.

May 8 - Iron Maiden, Samson, and Angel Witch share a bill at the Music Machine in Camden, London. Critic Geoff Barton coins the term "New Wave of British Heavy Metal" in a review of the show for Sounds magazine.

May 8 - The Cure release their debut album "Three Imaginary Boys" (Boys Don't Cry in US, Australia)

June 9 – The Bee Gees tie Bing Crosby, Elvis Presley, and The Beatles with a record six consecutive number-one singles in the U.S. in less than a single calendar year with "Love You Inside Out".

July 1 – The Sony Walkman goes on sale in Japan.

July 12 – "Disco Demolition Night", an anti-disco promotional event held by a Chicago rock station at Comiskey Park involving exploding disco records with a bomb, causes a near-riot between games during a baseball major league doubleheader, forcing the cancellation of the second game.

July 14 – Donna Summer, for a third time in an eight-month period, scores a #1 single with "Bad Girls", (staying atop the charts for five weeks); and #1 album of the same name, which also tops the Billboard 200 for six weeks. She is the fist women to have a #1 hit single and #1 album at the same time.

July 15 – President Jimmy Carter addresses the nation in a televised speech talking about the "crisis of confidence in America today"; it would go on to be known as his "national malaise" speech.

July 28 – Aerosmith and Ted Nugent headline the World Series of Rock at Municipal Stadium in Cleveland, Ohio. Also on the bill are Journey, Thin Lizzy, AC/DC and the Scorpions. Following the concert, Aerosmith guitarist Joe Perry quits the group after an argument with bandmates.

July 31 – 250,000 turn out in Central Park for a free concert by James Taylor in a campaign to restore Sheep Meadow.

August 10 – Michael Jackson releases his breakthrough album Off the Wall. It sells 7 million copies in the United States alone, making it a 7× platinum album.

August 24 – Prince's first hit single "I Wanna Be Your Lover" is released in the US, reaching number one on the RnB and number 11 on the Hot 100, selling more than one million copies in the US.

August 25 – "My Sharona" by The Knack hits #1 on the Billboard charts. This is the first time in over a year that a song hits #1 that is not either a disco song or a ballad, signaling the potential resurgence of rock.

September 1 – INXS perform in public for the first time, at the Oceanview Hotel in Umina, New South Wales.

September 2 – U2 enters the studio for the first time to record a locally released single.

September 7 - UK Band, The Buggles release the single, “Video Killed the Radio Star.” (It would go on to be the first music video aired on MTV in 1981.)

September 16 – The Sugarhill Gang release Rapper's Delight in the United States, the first rap single to become a Top 40 hit on the Billboard Hot 100.

October 2 - Pope John Paul II arrives in New York City for his first papal tour where he addresses the U.N. General Assembly against all forms of concentration camps and torture.

October 26 - The eradication of the smallpox virus is announced by the World Health Organization,[19][20] making smallpox the first of only two human diseases that have been driven to extinction (rinderpest in 2011 being the other).

November 3 – Donna Summer becomes the first female artist to have 5 top 10 hits in the same year.

November 4 – Iran hostage crisis begins: 500 Iranian radicals, mostly students, invade the U.S. Embassy in Tehran and take 90 hostages (53 of whom are American). They demand that the United States send the former Shah of Iran back to stand trial.

November 12 - Iran hostage crisis: In response to the hostage situation in Tehran, U.S. President Jimmy Carter orders a halt to all oil imports into the United States from Iran.

November 30 – Pink Floyd releases The Wall. It is one of rock's most well-known concept albums and one of the best-selling albums of all time. It is also the last album recorded with the line up of David Gilmour, Roger Waters, Nick Mason and Richard Wright.

December 3 - 3pm KRCL 90.9fm in Salt Lake City signs on. The first song played on-air is We Shall Overcome by Pete Seeger.

December 3 - The Who concert disaster: Eleven fans are killed during a crowd crush for unreserved seats before The Who rock concert at the Riverfront Coliseum in Cincinnati.

December 3 - The United States dollar exchange rate with the Deutsche Mark falls to 1.7079 DM, the all-time low so far; this record is not broken until November 5, 1987.

December 6 – The world premiere of Star Trek: The Motion Picture is held at the Smithsonian Institution in Washington, D.C.

December 31 - The One-child policy is introduced in China beginning with children born in 1979 – it contributes to Missing women of China. It was loosened in 2013.

Disco reigns supreme this year, with several number-one hits from The Bee Gees and Donna Summer. Several artists who were not regarded as disco acts, scored major successes by releasing disco-oriented singles or albums, including new wave band Blondie with their first US number-one single "Heart of Glass", Rod Stewart with "Do Ya Think I'm Sexy?", and symphonic rock band Electric Light Orchestra with their UK No. 1 LP Discovery.